Since the infamous canceled Rudy Gobert NBA game in Oklahoma City two years ago, after which there were no sports seasons, we’ve had problems reading the sports calendar. Confusion is still king. We thought it was time for March Madness, until Tom Brady’s phoenix act pre-empted any bracketology talk on Sunday night. Add MLB’s condensed free-agent scramble which is now abnormally vying with the NFL’s for fan attention. At least we can declare without contradiction that the first day of spring is Sunday. Your local budding crocuses will affirm that. Or at least mine are.

“If you have a garden and a library, you have everything you need” — Cicero.

The images most associated with the Bucks’ NBA championship last season were less about the on-court heroics of NBA Finals and regular-season MVP Giannis Antetokounmpo and more about the massive crowds that the Bucks were drawing for viewing parties in the Deer District outdoor entertainment area adjacent to Fiserv Forum.

Those playoff crowds began in the tens of thousands, and then exploded into a gathering estimated at more than 65,000 when the Bucks won the NBA Finals in Milwaukee on July 20.

With the NBA Playoffs approaching, so are thoughts of monetizing those anticipated crowds, beyond just the overflow at neighborhood bars and restaurants. The Bucks have been looking to put a corporate name on the Milwaukee’s version of LA Live outside for a while, but so far, no takers. Bucks President Peter Feigin said it has an asking price of $3 million to $4 million. There is a hotel under construction and more office and residential construction planned as well. The Bucks are seeking a minimum 10-year deal, said Feigin.

“It’s almost a content play, on top of signage and awareness,” he said. “We’re looking at unticketed events there with our Live Nation partners, so the value is only increasing when we get to everything from music, to food festivals to beginning and ending of road races to Holiday Markets. … Of course, there’s some urgency to get it done before the playoffs. someone involved in everything from minting NFTs to building out the rest of the area.”

While Milwaukee is the fourth-smallest NBA market, Feigin is calling that an advantage. “Our value proposition is that a company could own this real estate during large global events, like the NBA Finals or the Republican National Convention, if we’re able to land that,” he said. 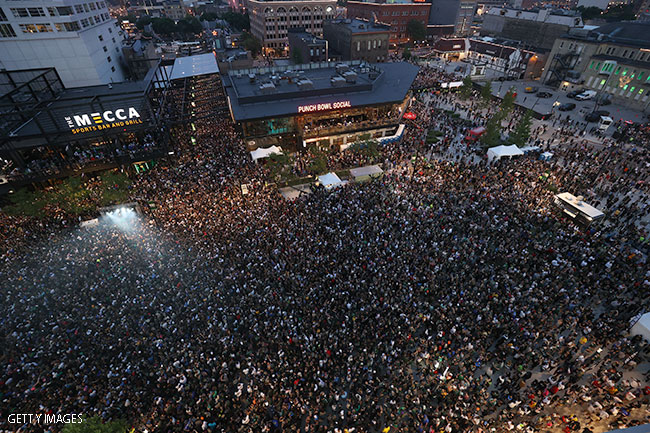 An estimated 65,000 fans gathered in the Deer District during NBA Finals Game 6

With March Madness on everyone’s mind, we thought it was an appropriate time to assess which brands took on the most incremental college sponsorship inventory over the past year.

SponsorUnited’s Bob Lynch reports that three-year-old online marketplace TicketSmarter, acquired by DigitalAlly this past September, took on more than 100 new college deals within the past 12 months. TicketSmarter’s overall collegiate roots are even deeper; it claims to have secondary ticketing at 35 conferences and 250 individual universities.

Coca-Cola Zero Sugar picked up more than 100 new collegiate deals, but that is more than likely a brand switch. Colleges also were by no means exempt from the newfound crypto activity, as the Voyager crypto exchange acquired 25 new collegiate deals — the same number purchased by Stanley Black & Decker’s DeWalt brand. Samsung rounds out the top five with 21 new college sponsorships.

Another heavy college spender, which had escaped our notice until now — since most of its locations are in the South and Southwest — is Raising Cane’s Chicken Fingers. The QSR with 600+ locations has a whopping 139 sponsorships — including 57 deals with schools, tourneys or bowl games — along with 29 NIL endorsements this year (which is a lot of fingers). 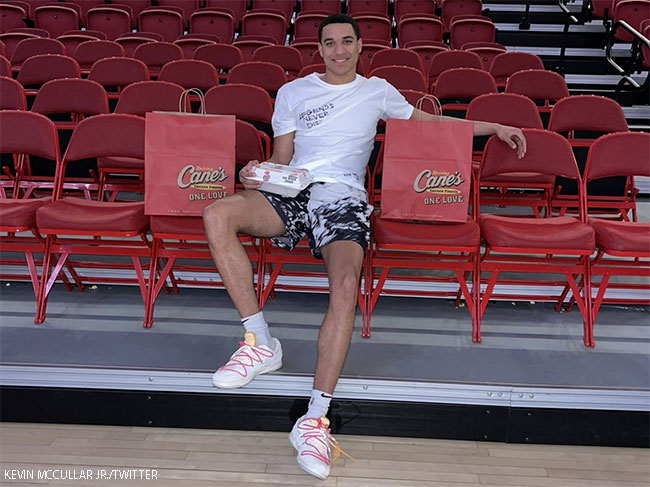